Reading today Marc Santora’s New York Times article on Hurricane Sandy as I scurry to hole up for the next couple of days in a nice dry spot and load up with fresh water. Santora points out that all over the mid-Atlantic, 50 million or more Americans are in this same predicament as Hurricane Sandy makes its presence known. Santora notes, “[s]andbag  joined the Halloween scarecrows,” so  I hope everyone in the region is spending time today getting prepared for the “Frankenstorm” that is about to hit. This is the perfect time to pick up some books to read. Will let you know tomorrow which book I am going to be holed up with . . .

CivilWarLand in Bad Decline by George Saunders is a gem of a book to read on a rainy, blustery day such as today when the city shuts down. Funny, witty, and scary, Saunders draws you into his bizarre world with stories and a novella. “I had to step into a closet to perform my Hatred Abatement Breathing,” the protagonist notes, which left me thinking how original Saunders can be. Another line, “Is this the life I envisioned for myself? My God, no.  I wanted to be a high jumper,” had me laughing out loud. The book is short and spicy and gives me time to watch the news between stories to check on Hurricane Sandy. Be safe! 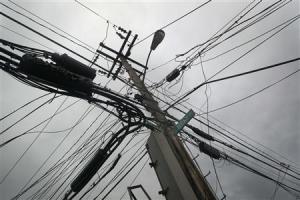 Reading James Barron in the New York Times, After the Devastation, a Daunting Recovery. Like most people in the region I have been cut-off for the last couple of days without electricity and can only read the Times by sunlight. Sandy, Barron says, “remade the landscape and rewrote the record books as it left behind a tableau of damage, destruction and grief.” Could not have said it better myself, as most of us are left with the cleanup; not only of our homes but of our lives.

Top image is of the aftermath of Hurricane Sandy in Santiago de Cuba. The photograph by Desmond Boylan (REUTERS) appeared in a 27 October Guardian, story on the storm. The wiry image is, the caption reads, “Power lines devastated by fire and the effects of Hurricane Sandy are seen in the Breezy Point section of the Queens borough of New York,” from a REUTERS on-line story of 30 October.

Reading Time Out guide to find somewhere warm with electricity and running water.  I just want to kick-back with some sunshine and a little moonshine. Wi-fi would not hurt either.

2 November 2012
Today is a day for books, television, and a chilled glass of wine. But alas! It is my fifth night and fourth day without electricity and my troubles are small compared to those families affected by hurricane Sandy. My thoughts and prayers are with you. It has been said, “What lies behind us and what lies before us are tiny matters compared to what lies within us.”

[A note from the Zeteo Editorial Adviser: As for who first said these words about what lies behind, before and within, according to the Quote Investigator (QI) it was not Emerson, Thoreau, Albert Jay Nock or Oliver Wendell Holmes, but rather one Henry Stanley Haskins, a Wall Street trader blamed in 1910 for “reckless and unbusinesslike dealing.” See an article on page 1 of the New York Times of February 17, 1910: “Stock Exchange Shuts Haskins Out; Finds Hocking Pool Leader Guilty of Reckless Dealing, but Lets Cause of the Smash Alone.” See also the relevant QI post of January 11, 2011.]

3 November 2012
Excited for the first time since Monday at the prospect of the return of electricity because heat will surely follow. I am only without heat and electricity, but my fellow citizens and neighbors are missing family members, friends, and even a cold bed to sleep in because of Sandy. I am, therefore, grateful for small things.