Memorial Day in the States is a long weekend when many of us go to the beach or a park or have a special picnic with friends and family. I ended up at Portland Head Light where the memorials consisted mainly of stones by the overlooks inscribed with the names not of fallen soldiers but of wealthy donors who in the last decade have funded the small park that embraces the Light. Portland Head was commissioned by George Washington. It’s been going strong ever since, through war and peace—for Casco Bay, on balance, mostly peace.

There was one small war memorial lodged quietly near the cliff side walking path that Henry Wadsworth Longfellow took on his six mile coastal saunters south from Portland and back. The small plaque was dedicated to dozens of seamen drowned in April 1945 as a rogue German U-boat sunk a Navy ship well in sight of the entry to Casco Bay less than a month before the end of the war. Battles had more or less stopped elsewhere. The attack was gratuitous.

In Israel, Memorial Day is something quite different, neither scenic nor bucolic.

Sirens sound at the appointed hour. Everything comes to a screeching stop. In the cities, buyers stop buying, drivers stop driving, house-cleaners stop cleaning, soccer games freeze in mid-play. Wherever you are you stop what you’re doing, stand stock-still in respectful silence. In reverence. In quiet steely resolve. 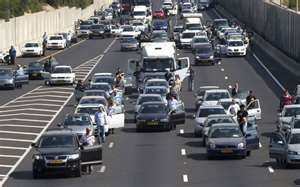 I made a point last Memorial Day in Israel to go downtown before the sirens began. I could have heard the wailing undulating pitch, sustained for what seemed well over two minutes, from anywhere. But I wanted to see.

Traffic stopped, drivers and passengers stepped out of their cars to stand by their driver’s side doors for the length of the vigil. The line of cars, in movement just a minute ago, were strangely stock-still, seemingly abandoned, the road now filled with citizens, hats off, heads slightly bowed.

Café owners stepped outside. Sidewalk customers rose from their cappuccinos. Pedestrians stopped walking. It was if a demon had cast a spell, freezing everyone in a kind of death—to better commune with the dead.

The stillness was uncanny. I was an utter newcomer, and had only an indirect sense of the numbers of those captured, killed or injured in the many brutal wars since 1948. Four or five faces of near-family who had suffered as prisoners or died were more immediate. Through the two minutes of sirens, everything focused in uncontested communion.

Nearly everyone in Israel except recent immigrants and the Orthodox (and Ultra-orthodox) has a fallen soldier in the family whose memory boils up. Apart from those exceptions, everyone, male or female, of any age over eighteen, has served in the military. Multiple wars and recurrent terrorism make the matter of remembering the dead, dead serious. 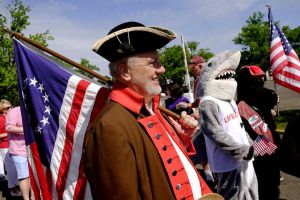 My local Public Radio station made a nod toward Memorial Day earlier this week. There were no doubt parades and marching bands here and elsewhere in the country. I have memories of marching in local parades from the 50s. WWII was still a vivid common memory. The NPR radio host interviewed an author who made a statistical observation. Only 1 percent of the US population has immediate, familial association with someone in the armed services. In Israel the figure would be 100% (forgetting the Orthodox and recent arrivals).

To be in the military in the US, or in a family where someone is serving, is to be a notable exception. We know that 1% corner the wealth of the country putting 99 percent at risk. We have not heard that only 1% of the country is in uniform or is close family to the uniformed. The relative invisibility of the military dead makes commitment of more men and women to war zones a bit easier than if we knew, as every Israeli citizen knows, the names of local soldiers at risk, or fallen. I can’t name three soldiers, friends or acquaintances, who have died in USA combat the last ten or thirty years. Am I unusual in this? I can easily name three Israeli dead on the basis of only a couple of years in residence.

There is something sobering and a bit scary about Memorial Day in Israel. Remembering the recent dead raises the shadow of impending future dead. At the small memorial at Portland Head the flicker of gravitas was but a flicker. The lighthouse foghorn did not wail. We could bend in the breeze to look down at the gentle roll of the surf and the busy work of mother duck rounding up ducklings as a lone Eider approached on the swell.