Mock Yiddish and Ethnic Parody in the Vaudeville Melting-Pot

While weary critiques of Blackface, Yellowface and Redface have become almost a Halloween tradition in their own right, “Jewface” in popular music has largely been forgotten.[1]). However, this past spring, the Center for Jewish History in New York City hosted an exhibit by the YIVO Institute for Jewish Research: “Jewface: ‘Yiddish’ Dialect Songs of Tin Pan Alley.” I quote from the exhibition’s website:

With his fake beard, putty nose, and thick Yiddish accent, the “stage Jew” was once a common character in vaudeville, part of genre that mocked immigrants and minorities in terribly offensive ways. Essentially a variant of blackface minstrelsy, the music that accompanied these “Jewface” performances was not only performed on stage, but was also published as colorfully illustrated sheet music so fans could play them at home.

While the genre was initially created by gentile performers to make fun of Jewish immigrants, it was eventually taken over by Jews, who apparently felt that they could do a better job mocking themselves. Irving Berlin, Fannie Brice, and Sophie Tucker were just a few who wrote and performed these Yiddish-inflected songs.

Jewface was often heavily dependent on comic accents, and the Yiddish-accented, recent Jewish immigrant is no longer part of the fabric of American life. Meanwhile many “Yinglish” locutions—Yiddish words and phrases entering English—have become so established as to lose their comic or exotic edge. However, in the golden age of vaudeville, this mix of mock-Yiddish accents, mildly eastern-or Klezmer-sounding melodies, Jewish-related lyrics and offensive costumes, complete with putty noses, formed a subgenre in their own right.

YIVO has, generously, made available online recordings of the songs. The curious will quickly discover that some of these songs deal in the crudest of anti-Semitic stereotypes. For example, a full verse of When Mose with His Nose Leads the Band is simply jokey rhymes for identifiably Jewish names. Yet the recorded performance, strings of “oi” aside, is largely sung without a noticeable accent. This listener suspects, not so much that the combination of both would have been too anti-Semitic or offensive even for the time, but that there was already enough offensive anti-Semitism to keep an audience entertained, and so doing the voice was an unnecessary effort.

The song At the Yiddish Wedding Jubilee—perhaps the only one to use clear grammatical markers of Yiddish speech as well as an extremely strong comic accent—offers an amusing, even pleasant slice of Jewish life. The comprehensive mimicry of Jewish speech seems to be an attempt to replicate the feel of this Jewish wedding as much as to ridicule its guests. Similarly, Vamping Rose: Yiddisher Fox Trot could be any other song about a beautiful femme fatale, were it not for throwaway lines about her being a “Ghetto Queen” and “Cohen’s daughter,” and faint Eastern harmonies in the music, just enough to make the fox-trot exotically Yiddish. Strange, however, is the “-er” suffix, used in Yiddish adjectives but, of course, not English, and so presuming some knowledge of the Yiddish language on the part of a listener. The Jewface in this song is almost tacked on. In contrast to the first song, where the Jewish themes are incidental or treated semi-sympathetically, the mock-Jewish performance must be ramped up to compensate.

Sadie Salome (Go Home), a reaction to a scandalous New York performance of Richard Strauss’s opera Salome, is a similar erotic-comic song about a woman of easy virtue, which only lapses into mock-Yiddish for the voice of her hapless boyfriend. (Sadie herself never speaks, possibly because she simply needs to act as the object of desire, possibly because a Yiddish accent might not seem sexy enough for a Biblical seductress, and possibly to save a male music-hall singer from having to sing the role of a female opera singer.) While it could be a sad song about a man unable to cope with his lover’s risqué stage role, the joke accent serves to make him a figure of fun, leaving the listener to identify instead with the audience watching her Dance of the Seven Veils. Since the main theme of the song is titillation, even the presence of Jewish characters is not essential. Rather, “Sadie Salome” uses images of twentieth-century American Jews to intensify the exotic, racy, Biblical theme, and mean-spirited parody to ensure that the listener identifies with the excited and voyeuristic men watching the show, rather than the exasperatedly jealous one waiting diligently by stage door.

Cohen Owes Me Ninety-Seven Dollars, sung with a very strong accent, initially seems almost as offensive and stereotype-heavy as “Mose and his Nose,” as it deals with a Jewish man on his deathbed who urges his son to call on his creditors when he’s gone. But even ignoring that its author (Irving Berlin) was Jewish, we notice two things: first, this is not the old stereotype of usurious Jews preying on Gentiles, but a song explicitly about Jewish acquaintances hassling each other over debts. Secondly, since the old man survives, and probably with doctor’s bills coming in, he was perhaps right to demand the $97. This song can be read either as the obvious stereotype-ridden parody, or as a comical slice of life and a humorous portrayal of intra-community Jewish politics, with the pronounced Yiddish accent flagging up not ethnic divides but generational ones, between native-born son and immigrant father. But the pleasures here are hardly pure. While Jewish listeners can laugh affectionately at their fathers’ generation, its old-country accent and internal tensions, non-Jewish listeners can happily chortle away at the money-grubbing Jew and his outrageous accent, with the added cover that this is what Jewish songwriters are saying about their own community. To a non-Jewish listener, these nuances of generation, acculturation, and second-language acquisition are harder to access, so what for Berlin could have been his father or grandfather’s accent is for others just that of an avaricious foreigner. 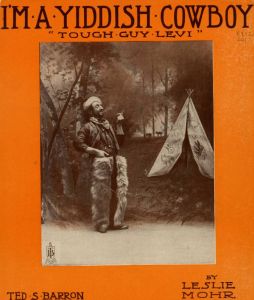 A few songs deal with encounters between Jews and other ethnic groups, encounters that are either comically unlikely (I’m a Yiddish Cowboy: Tough Guy Levi), detailing a marriage to a Native American woman) or standard fare for New York (Under the Matzos Tree, a Jewish-Irish romance). Comic mismatching is the common theme. With its simple quarter-note drum rhythm, “I’m a Yiddish Cowboy” parodies Native American, rather than Jewish music, while “Under the Matzos Tree” lurches between a comical Yiddish accent and a comical Irish one. Jewface seems to be part of a whole archipelago of mock-ethnic comic hits, quite ready to cross over ethnic lines and to intermingle, as a grotesque fairground mirror of the complicated American melting pot.

Jewface, as a genre of comic performance, demonstrates a large amount of variation when examined closely. The mock-Jewishness ranges in function from outright spite and ridicule, to heavily sexual exoticism, to almost an afterthought, with the fashionable genre of ethnic parody crowbarred in like a wobbly dubstep bassline might be today. As well as a shortcut for making sense of the world or simplifying human difference, ethnic stereotypes provide color and entertainment, a pleasurable way to look at a racial or cultural Other, without focusing so long or so deeply that it becomes unpleasant. Jewface not only mocks, it allows a listener to build an idea of what a Jew (or Native American, or Irishman, or their love-affair) is like, without having to wonder how the personal relationships of the singer undressing on stage will be affected, or why a poor immigrant on his deathbed might worry about his family’s finances. Ethnic parody cuts out these personal and individual nuances, streamlining the complex multicultural world of turn-of-the-century America into something that seemed, once upon a time, simple, entertaining, and easily disseminated.

Alex Marshall has just finished a DPhil in German at Brasenose College, Oxford on early Zionism and concepts of nationhood.

[1] Aside from an incident a few years ago involving the rapper Macklemore. For more on this see the CNN story, Macklemore apologizes for wig, beard and nose but defends ‘random’ disguise (by Alan Duke, May 20, 2014). From the opening paragraphs:

Rapper Macklemore, who won a Grammy for a song praised for its cultural sensitivity, insists that he wasn’t stereotyping Jews with a costume he wore to a Seattle event Friday.

The hat, big fake nose, black beard and wig were “a random costume” thrown together “so that I could walk around unnoticed and surprise the crowd with a short performance,” the rapper said in an “apology to anybody that I may have offended” released Monday night.

While the Anti-Defamation League said the group would “take him at his word that he did not have any ill intent,” comedian Seth Rogen failed to see the comedy, calling Macklemore out on Twitter for wearing an “anti-Semitic costume” while performing his hit song “Thrift Shop.”

Images are from the covers of sheet music for some of the songs.