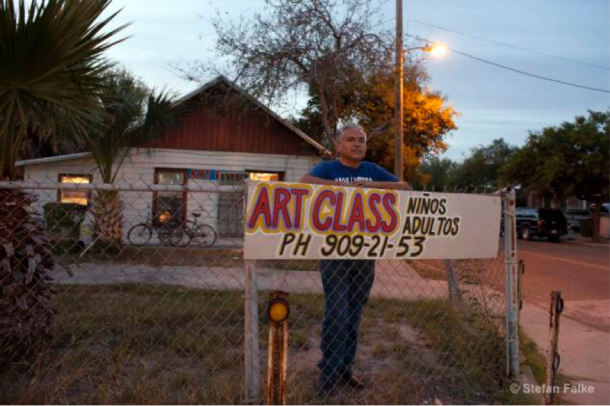 {Note: This is the last in Zeteo‘s Fall 2014 series of pieces related to borders.}

Stefan Falke, a German photographer who lives in New York, has been visiting again and again the cities and towns along the 2,000-mile long divide between the United States of America and what is officially los Estados Unidos Mexicanos. He has taken and posted, on borderartists.com, pictures of artists and art supporters who live along this border.

Of particular interest is Falke’s idea that the posting of these pictures might help residents and outsiders better appreciate this community of border residents, and the fact that it is a community: of 14 million people. As the map at right suggests, the distances between them are great, but they share similar realities: the border, the cultural mix, the police, and the fence, as well as a similar climate, economy, and artistic apsirations.

What follows are twelve of the hundreds of photographs Falke has taken of the artists and their art works. His website offers many others, and many of the artists featured below also have their own websites.

All photographs are copyright © Stefan Falke.

“Life in Tijuana is a life in two cities. Junk food from San Diego and Tijuana colonizes consumers every day,” Llana says. In 2010 he moved away from conventional oil painting and began making art with junk-food packages. His focus is obesity, a health problem that affects millions of Mexicans and Americans each year. 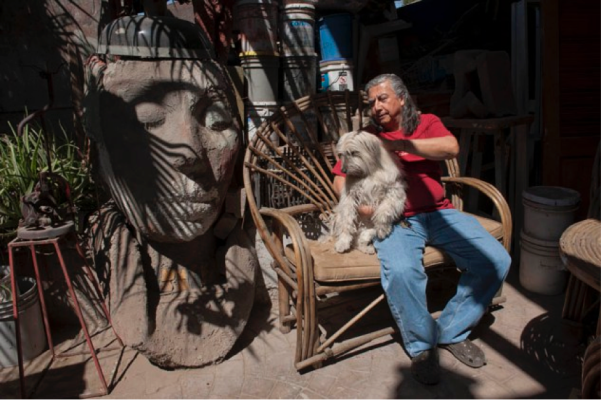 One of Coronado’s long-standing and best-known murals, which was sponsored by the Mexican education ministry and The College of the Northern Border in Baja California, was mistakenly erased in 2010. Coronado told El Mexicano, a regional newspaper:

I think this should leave a mark in the road so that civic servants learn that their actions are not unsupervised, that they can’t make arbitrary decisions. It seems absurd that years of artistic work can be erased just like that. Artists may cease to exist, but their work transcends the ages. Such is the case with anthropological excavations. Anthropologists find out about previous men and times—about previous rulers, kings, and pharaohs—and then leave an inscription documenting their findings. Their work has a shot at transcending. Hence, let the passing of time, not the caprice of blind leaders, destroy artists’ work.

Cedillo inherited a piñata business from his father. Along with the occasional crocodile, the workshop features traditional star-shaped piñatas and the more commercial American cartoon characters.

“My intention is to mock the palpable reality and its false sense of order, normalcy, security and stability,” Jaeger writes. “I want to engage in a conversation with the viewer which enables a questioning about realities, beauty, sanity, solitude, limitations, and the vulnerability of existence. I am captivated by the dialogue that comes out of these arrangements.” 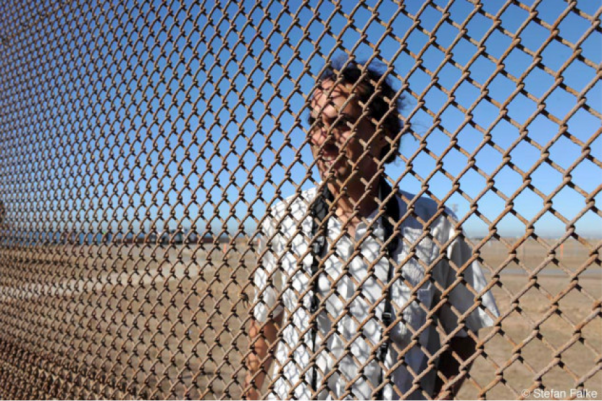 Watman used to organize cross-border poetry readings on both sides of the border fence in Playas de Tijuana. Since the US added a second and much bigger fence to the border, the meetings have been held with the use of sign language and megaphones. Daniel is also one of the creators of the bi-national garden in Playas de Tijuana. The garden is “one,” but on both sides of the fence.

Saddened by the ruins and abandonment of Tijuana’s historic downtown, Buenrostro became a founder of Reactivando Espacios, a company dedicated to revitalizing forgotten places. The colorful arched roof shown above is the original structure of a bus station that was slated to be demolished. Now the station is to become a bi-national creative and technology working space for entrepreneurs from Tijuana and San Diego.

Maraña made this mural in collaboration with students from a public school. It addressed their hopes for the city. The mural has since been demolished. 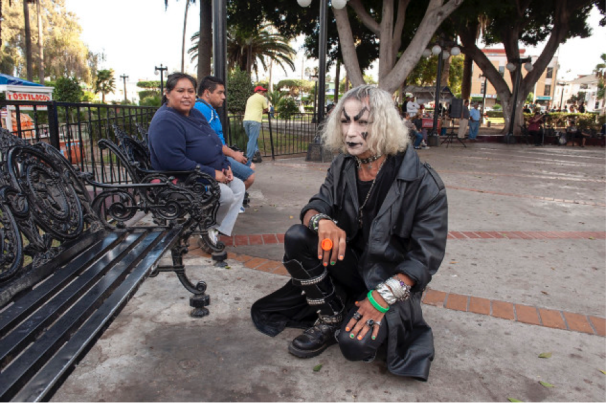 Balthazar Hernandez died one day, and in his place lives a man known as El Muertho de Tijuana (roughly translated as Tijuana’s Dead One or Tijuana’s Corpse). Once a follower of the Evangelical Church, El Muertho now preaches his own doctrine through homemade gothic synthpop. His lyrics are rude, meant to awaken a lethargic society controlled by social media. (For a sample, listen and watch “Viejo Decrepito.”)

My soul is hard, my heart is hard—

A run-down old man, seeking help from a song.

As she leaps, Aidé is holding onto a costume: a rose-colored quinceañera dress. Quinceañera is the traditional celebration of a girl’s fifteenth birthday. Aidé founded a theatre company to provide an escape from the oppressive sense of violence at the border.

No longer feeling safe after a wave of violence, Gallegos shifted from street photography to portrait and conceptual work. The new images still speak about violence, insecurity, and detachment. Here, Gallegos holds the portrait of a man mourning the death of a friend of theirs.

Svarzvbein grew up in El Paso, Texas, an American border city with strong cultural and economic bonds to its sister city, Ciudad Juarez, Mexico. In recent years, these bonds have frayed due to drug-cartel violence and anti-immigrant sentiment. Learning that a trolley had run daily between El Paso and Juarez from 1902 to 1974, Svarzbein launched a fictitious advertising campaign for a new trolley to bring the cities together again. The idea gained some political traction, and the campaign is no longer fictitious. El Paso has been awarded $97 million to re-establish a streetcar line using these refurbished old cars.