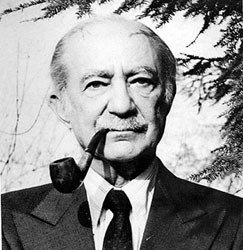 The quotation of this post’s title is from Morris Kline, one of the great writers about mathematics. Kline, who died in 1992 and taught at New York University from 1938 to 1975, published a number of books — e.g. Mathematics: The Loss of Certainty (from which the quote comes); Mathematics: A Cultural Approach, and Mathematics in Western Culture — that continue to be worth reading.

Recently I returned to Kline’s Mathematics for the Nonmathematician

with an idea that it would help me brush up my rude understanding of non-Euclidean geometry. Instead I realized, and with great pleasure, that the book was in some sense only masquerading as a mathematics text, while being in fact an intellectual history of Western thought. Thus, reading, I was reminded again of what we might call the essential tensions: e.g. between appearance and this something else we call reality. Or is the tension between the reality of appearances and our idealizations, which we (or our scientists) often try to pass off as such things as basic physical principles, or as the underlying reality?

It would take a very different kind of piece or post to reprise Kline’s history or to review the several dichotomies that have dominated our Western thinking. I will close the present text with a quotation from Bertrand Russell (as quoted by Kline). To my mind it speaks both to the wonders of Western thinking and to the extent to which it has been psychologically motivated (a search for order) and has, in a sense, sacrificed truth in order to reduce anxiety.

Remote from human passions, remote even from the pitiful facts of nature, the generations have gradually created an ordered cosmos, where pure thought can dwell as in its natural home, and where one, at least, of our nobler impulses can escape from the dreary exile of the actual world.

The photograph of Kline is from a Web post on Mathematics: The Loss of Certainty

The Russell quotation is from his own The Study of Mathematics.

The phrase “essential tension” may well have come to me from the title of another admired book, Thomas Kuhn’s The Essential Tension: Selected Studies in Scientific Tradition and Change

. I have not sought, however, to harmonize my use of the phrase with Kuhn’s.